So last week it was predicted St. Louis would get snow. The accumulations varied as the week progressed but most of St. Louis was either giddy about it or just plain dreading it. We in the Nevil family are always on the giddy side of the fence when it comes to snow. It’s pretty. It’s fun. And hey it’s winter. I’d way rather have snow to look at then just dead trees and grass. IT IS SO SPARKLY!

Plus, how can you resist the lovely sounds of snow and ice covered trees? The creaking of the ice covered branches, the stillness of the night, the bright way the sunlight reflects off all the glittering white…ahh…it’s breathtaking. Did I mention it’s fun to play in?

Thursday morning began with my hubby heading off to work as normal. The kiddos and I were having a lovely and relaxing day at home as school had already been canceled the night before for the impending storm. The boys and I had gone on a spontaneous donut run to our new favorite shoppe (Old Town Doughnuts and they are open 24 hours!) very early that morning. The snow wasn’t expected to start until 10 am, so when we left the house, it was a totally normal winter morning in the Lou.

My hubby left work at noon (or a little before) and it took him 2 hours to get home! He had crazy stories of death-defying traffic too. People stopping in the middle of the highway, yes just stopping, getting out of their cars and cleaning off their windshields and windshield wipers. In the middle of the highway! Cars were abandoned all over the highway and people weren’t even attempting to get them out of the middle of the road. They just left ’em there! “It was pandelerium!” he he he he….Anyway, he made it home safe and sound that afternoon. (We made it out with more than 6″ inches of snowfall here in St. Charles!) 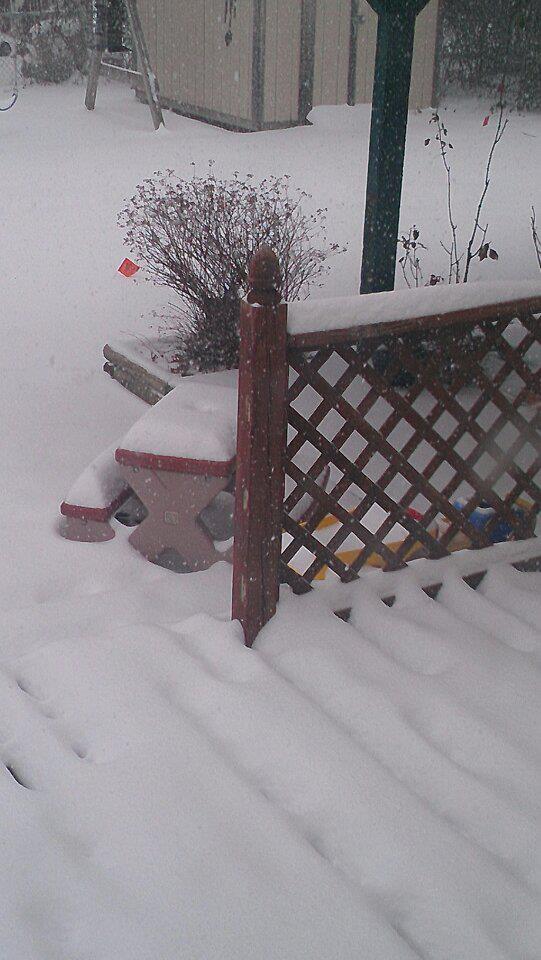 At home, we were watching the snow fall, I worked on my photo album for 2012 (I’m up to July people!) and the boys were watching movies. But shortly after 3:00 pm, my tummy started hurting. I didn’t think much of it because I had been sort of nauseous off and on for the past day or two. I didn’t even think about Wednesday and how sick Cecelia had been. (Poo-splosions all day long and I couldn’t get her to eat). You would think I would connect the dots a bit quicker…but alas, sparkly snow blurred my vision. Hindsight is always 20/20.

I started around 6:30 pm. Thankfully, Jeremy told me he had the kids and dinner under control. Good thing because every smell made another wave of nausea flow over me and sent me reeling to the bathroom. I felt better for a few minutes after I threw up the first 2 times. But then, I heard Chase crying. He was saying his tummy hurt and he didn’t want to eat. Jeremy was telling him he had to eat his dinner. And it clicked.

I ran out to talk to him. To beg him not to make Chase eat. But you see, Chase ALWAYS says he doesn’t want to eat. This was nothing new. But my Mommy Spidey senses were telling me he really wasn’t feeling well. Jeremy wasn’t buying it. I was too sick to fight it. So I went and threw up some more.

Somehow, the kids got to bed. I vaguely remember attempting to nurse Cecelia before she went to sleep, but it didn’t work out so well. She slept fitfully for the first few hours. By 9:30 pm, I had a break in the puking. I gave Cecelia a proper feeding and curled up in bed. And then I heard Chase cough. And he threw up. Twice. Once in his room, once in the bathroom on the floor. (And I guess once in the toilet. I’ll give him a solid 3 times.)

My poor baby! I knew it was a bug at this point and that the others would be destined to follow suite. Sweet Chase had never thrown up before and kept crying and looking at Jeremy confused saying “I coughed”. Jeremy was so sweet and tender. He is the best Daddy! He explained it all to Chase, cleaned him up and sent him to cuddle with me while he cleaned up the gargantuan mess in his room and the bathroom. Chase and I cuddled and compared puke stories.

Jeremy got everything situated and somehow managed to maintain his own composure. (I seriously don’t know how. It was gross people. So, so gross.) He told me he was going to go downstairs and finish watching his movie he had rented. I told him I didn’t think he should go that far but he thought it would be fine.

Then, about 11:00, I heard Cooper cough. Jeremy must have heard it too. And probably me jumping out of bed and screaming “JERRRRRRRRRRRRRRRRRRRRR!”. He was upstairs in 2 seconds but Cooper (an experienced puker) couldn’t make it. He was down from the top bunk and 1/2 way through his bedroom when he lost his dinner. But the 2nd time he made it to the toilet! Poor Jeremy….

I couldn’t attend to anyone at this point. I had chills and was still crazy nauseous and cuddling Chase. But the conversation between Cooper and Jeremy was so priceless! When he was done puking he said to Jeremy (who was congratulating him on making it to the toilet and knowing what to do), “Wow, my tummy actually feels much better now!” in the happiest tone! Cooper joined Chase and I while Jeremy cleaned again.

By midnight, as much cleaning as could be done was done. (We were out of carpet cleaner by the way. Yes. Completely out. The smell was atrocious.) The boys had clean sheets and clothes and all were sent to their own beds. A weary Daddy laid down next to me for sleep. At 1:00 am, he joined the rest of us. Thankfully, we gave the boys each their very own puke bowl to sleep with. Jeremy was up with Cooper multiple times all the rest of the night. Not to mention his own sickness that had set in. By 5:00 am when Cecelia was awake, we were thoroughly miserable. I couldn’t even pick Cecelia up out of her crib because  I was so weak and trembling. Jeremy had to help me, but he wasn’t much better!

I have no idea how we made it through the morning. Chase woke up totally fine as did Cecelia. But Jeremy, Cooper and I were in and out. The day is a blur to me. I remember seeing all the beautiful snow. There was so.much.snow. And I remember listening to my neighbors shovel their driveways and thinking “sooooooo not happening in this house!”. By noon on Friday, I had managed to keep some fluids down for several hours. So I hydrated like crazy. By 1:00 pm, I was able to manage some toast with only nausea. Then I realized it. I had one diaper left for Cecelia. One.

Jeremy was doing the best out of all of us (who could drive at least). So off he and Chase went to Target late that afternoon while the rest of us slept.  Praise God for Gatorade people.

He returned with carpet cleaner, juice, gatorade, diapers, lysol wipes and 12 pack of paper towels.  Everyone ate toast and went to bed at 7:00 pm. And everyone slept! Around midnight, I woke up and realized suddenly that I felt better. WAY better. Oh man was I relieved. I went back to sleep and woke up Saturday morning feeling like a real human being! We all got up and got moving and celebrated with more toast and gatorade. hurray!

Then, the great clean up began. We shampoo’d carpets, we scrubbed floors, door knobs, handles, toilets and did loads and loads of laundry. By Saturday afternoon we had graduated to grilled cheese and gatorade! The boys dug out our driveway and we decided to take a break from cleaning and take the boys sledding. We went to Blanchette Park in St. Charles by the river and OHHHHHH what fun they had on those hills of death!

Cecelia and I sat in the car where it was warm and cozy while the boys played. It was actually a lot of fun watching everyone careen into one another! We headed home after an hour and a half of snow and sledding bliss. Everyone was tired and ready for more food…this time we were up to quesadillas! Tortillas and cheese! And we graduated to apple juice! (Water was in there too throughout the weekend I must add. We were intentionally trying to replace some salts and sugars.)

Oh and I forgot to mention that on Friday, Cecelia stood up/pulled herself to standing for the first time! It’s a grainy shot but here is a picture of her right after she did it. She was very proud of herself…but completely lost as to how to get back down again. 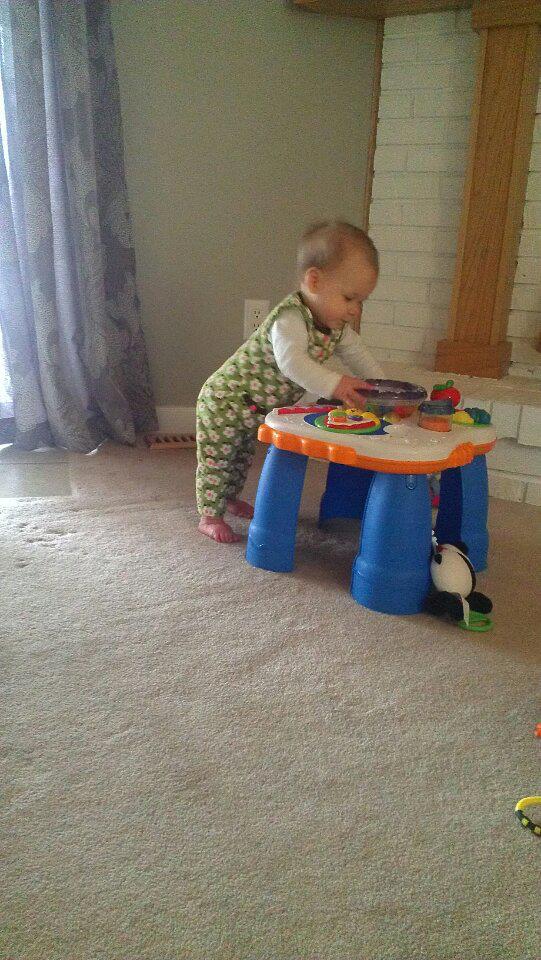 By Sunday, we were all 100%. I even made dinner! Well, I reheated the chili I had made in the crockpot on Thursday when this drama all began. And we tried our hand at the banana ice cream people are raving about on Pinterest. It totally worked and was sooooooooooooooooooooooooooo good!

So while we didn’t get to enjoy the snow like we wanted, we missed out on the Home and Garden show and I missed celebrating a friend retiring, we made it out alive. And a few pounds lighter.

Saturday night after family prayers Cooper snuggled up in his fresh, clean, warm sheets and smiled. He sang out “Goodnight fun family!!!” as we turned off the lights. I love that he views our week and weekend as “fun”. But we did have some hilarious good times. Somehow, being miserable together is bonding. Weird huh? I guess the family that pukes together stays together?

I started cataloging our life like a high school year book in 2011. It started after I saw my two best friends doing something like it with digital photo albums on Shutterfly. 2011 was the year that we would be moving from WA to St. Louis, MO. So it was perfect timing!

My book turned out perfect. There was great method to my madness and I was so happy with the results. I worked on it a little each and every month that entire year in fact!  When it was time to print it out, I just hit print and bam! 2011 before my eyes and on my coffee table.

I started again in 2012 as soon as the calendar changed over for the new year. And I stopped…in March. Because I was about to have a baby. I started nesting and fussing with many, many other things. By the time August rolled around, I was finally up to a semblance of sanity and a very small window of free time. I started working on just uploading the thousands and thousands of pictures of our new baby girl. And that’s when I stopped.

I picked it up and messed with it a few more times throughout the fall. But then the holidays came…and I got wrapped up in them. And all the pictures…oh the pictures.

So it’s February now…of the following year. Guess where my 2012 Annual Family Album is at?

Yup. Still in March. Still in folder land on my computer.

I’m trying to decide how to handle it. I need a system….I need a goal…I need manageable chunks so I don’t spiral into oblivion and give up.